The slides for my March Meeting talk, “Variable Coupling of Two Flux Qubits”, are now available online. As promised, below the fold is a non-technical explanation of the results presented there. This work builds on the single-qubit work, about which I posted in August; it may be helpful to review that post before reading the following. 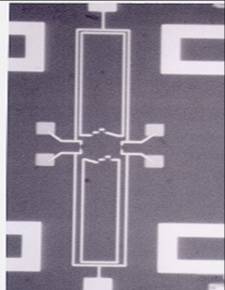 Shown above is a picture of our device, taken with a scanning electron microscope. The field of view is about a tenth of a millimeter across. The key elements are the three loops in the center; the two inner loops are the qubits, and the outer loop is a superconducting quantum interference device (SQUID) which measures the magnetic field inside the loop. The loops are made of aluminum, patterned onto a silicon substrate.
The two states of each quantum bit correspond to electrical currents running around the loop, either clockwise or counterclockwise. These currents generate magnetic fields; the total magnetic field through a loop is called the magnetic flux, so this type of qubit is called a flux qubit. In our previous work we measured properties of a single flux qubit in isolation, but to make a functioning quantum computer one needs multiple qubits that interact with each other.
It turns out that any quantum computation can be broken down into operations on single qubits and pairs of qubits, so demonstrating two-qubit interactions is particularly essential. It’s pretty straightforward to get flux qubits to interact: just place them next to each other on the chip, as we’ve done in our design. Although they’re not electrically connected, the magnetic fields produced by each qubit affect the other.
There are at least two interesting questions to ask about this interaction. The first is whether these two circuits really interact as quantum objects. Each qubit contains about 1012 electrons, but quantum effects are typically only seen at the level of a few electrons–in larger systems, an effect called decoherence produces a kind of average over the quantum effects, and only classical physics is observed.
The second interesting question is whether this type of interaction is suitable for making logic gates in a quantum computer. We’ve designed our chip with this in mind, and implemented a scheme for varying the strength of the qubit coupling. There are really two effects coupling the qubits together: the one I alluded to before is simply the magnetic fields in one qubit affecting the other qubit directly, and vice versa; this depends only on the geometry of the system, so it’s not something we can adjust. But the SQUID enclosing both qubits is affected by the magnetic fields as well, and its response feeds back to the qubits. Furthermore, the reaction of the SQUID depends on the electric current we apply to it. So we designed a circuit in which the qubits are coupled by default, but by applying electrical current we can change the coupling, and even turn it off.
You may recall from my earlier post on the subject that we can map out the energy levels in single qubits by varying the magnetic flux in the loop from an external coil, and applying radiation. When the radiation is resonant with the energy difference between the two qubit states, the qubit absorbs the energy and flips to the higher state. We see this as a peak in the SQUID signal, and by sweeping the flux we observe the hyperbola which is characteristic of a flux qubit spectrum. We measured this for each of our two qubits, and found that the parameters were within 1% of each other. This was encouraging: qubits in a practical quantum computer will have to be pretty closely matched, so it’s good to see that this is feasible with our process. 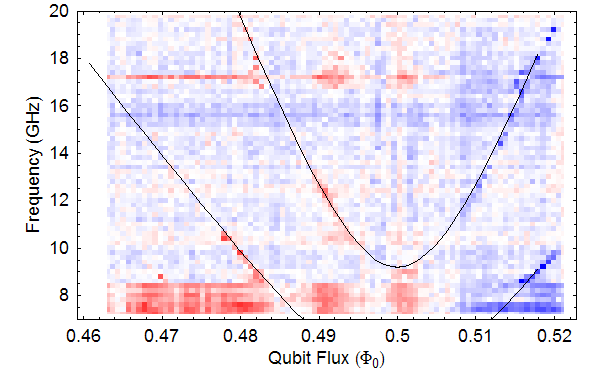 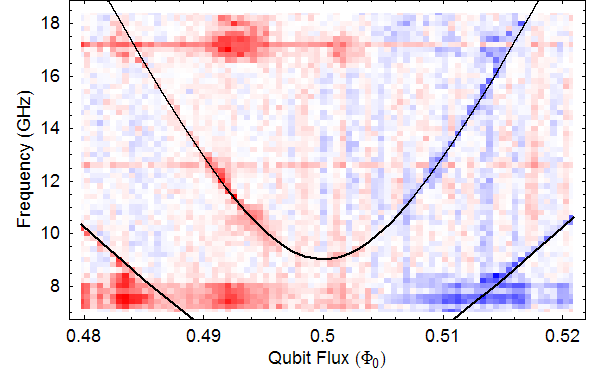 Left: Qubit A (“Angelina”). Right: Qubit B (“Brad”).
Now in each of those spectra, the qubit not under study was biased well away from its degeneracy point: we effectively turned off one qubit while measuring the other. However, we can instead bias both qubits near each other, so that the two spectra overlap:

If the two qubits were uncoupled, they would act as two separate systems, and the two spectra should just cross over each other (as they appear to in the above data). In the jargon of quantum mechanics, the two qubits are degenerate at the crossing point. However, when the qubits interact they form a single quantum system with four distinct states. The presence of the interaction splits the degeneracy, so that the two spectra never cross; instead there is a small gap between them at the crossing point. And indeed, when we look closer at the crossing, this is what we see: 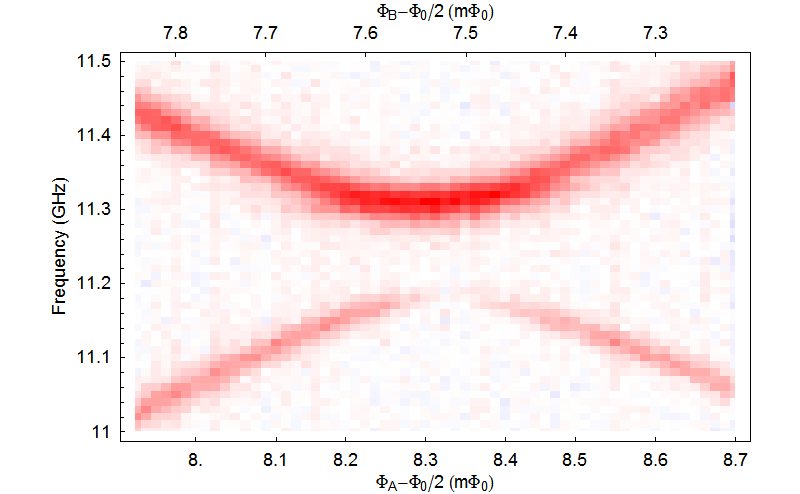 The presence of this splitting (which is about 123 MHz) proves that we really have coupled qubits. In addition it agrees very well with our quantum mechanical calculations of the system. One interesting feature is the way the lower spectral line disappears at the center of the plot, while the upper line becomes more intense. This too is explained by quantum mechanics: it’s due to a special symmetry that occurs when the qubits are biased at the same point. Since the qubits are under identical conditions, our observations shouldn’t change if we interchange the two qubits mathematically. Observed quantities only depend on the square of the function describing the qubit state, so there are two ways to preserve it under interchange: either the function is exactly the same, or the interchanged function acquires a negative sign which then disappears after squaring. There are three states of the former type, called triplet states, and one state of the latter type, called the singlet state.
As I mentioned before, there are four states in the coupled system, but we’re only seeing two spectral lines. In this measurement the qubit starts in the lowest energy state and is excited to a higher state by absorbing radiation, so these lines represent the energy differences between the first two excited states and the ground state. There’s a third excited state that’s at much higher energy, so it doesn’t appear in this plot. It turns out that the ground state, the second excited state, and the third excited state compose the triplet states at the center of the crossing, while the first excited state becomes a pure singlet state. And it’s possible to change triplet states into each other by applying radiation, but it’s not possible to change a triplet into a singlet: this is a forbidden transition, and so we aren’t able to observe the center of the lower spectral line.
Now, what happens when we turn up the current in the SQUID? We see the size of the splitting change:

Here the splitting between the spectral lines decreased to about 96 MHz. We tried applying a few different values of the current, and found that we could obtain the expected variation in the coupling:

That red line is based on our calculations of the system; it predicts that for higher currents in the SQUID we should be able to turn the coupling off entirely, and the two spectral lines should cross. If we can achieve this, we can implement a controlled-not (CNOT) operation, which together with single-qubit operations is a universal quantum logic gate. (One can still implement a CNOT without turning the coupling off, but it’s more difficult.)
So we have a pair of coupled qubits that behaves in a way perfectly consistent with quantum mechanical calculations. One might then ask about entanglement: the quantum effect in which the states of two objects are linked, even if they are later uncoupled. It’s a bit tricky to prove that our system is entangled, because this is ultimately a statement about correlations between the two qubits. Since we only have one readout device measuring the whole system, we can’t check the qubits independently to confirm entanglement. So a definitive measurement will have to be in a future experiment. In the meantime, we plan to do some measurements of the coupled system (we already have some coherent manipulation) and look at other schemes for variable coupling.